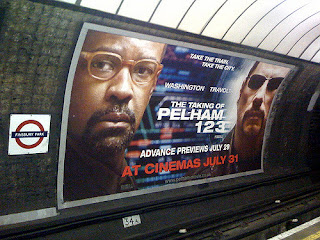 It could have all gone wrong in this movie, one silly mistake, or the wrong course of word play action would have led to a catastrophic loss of lives in this train hijacking sequel, in a way, nice job was done, smart. The only problem was that it felt like a walk in the park (I wouldn’t say total), too easy, and yeah I’ve agreed to remarks on how shallow the movie is, or how it isn’t deep I don’t really feel so. Here we have Walter Garber,played by Denzel Washington, a father and a husband, and the bad guy  played by John Travolta. The movie is based on a novel. The movie is great has an awesome feel, the tension is great.

But honestly the part of the movie confusing to me was that I couldn’t decide if it was an emotional drama, or a thriller, because thriller wise there was nothing really new and I know it’s an old movie but still, back then, could still say the same I mean a rat climbed into your pants?. That didn’t seem like a way to derail the whole plot.

If we go to the characters and emotional aspects of the movie, it was awesome, not really in sections but in the whole ride. Denzel is this simple man haloed angel while John Travolta is the unrelenting devil, I think he even played a much better part because the whole life of the movie depended on him which was shown on how it came to life on getting Denzel to admit on the bribe, nothing like throwing a little dirt on our angel but his intentions were moving.

Also Read  A trailblazer from Africa, The Queen of Katwe.

Emotionally it is a brilliant movie, but the plot seemed too basic…nah, I’m not saying write it off? But more could have been done, but hey its your typical hostage situation again and what was the point of the camera thing if it wasn’t going to be used in any way? They should have scratched that and also the whole deadly Nascar’99 stuff didn’t get to me but hey if you’re looking for some personal intense hostage situation? This is one movie to consider. The emotional hieghtness was good, made up for the plot and when he came home with the carton of milk?…aaww.

Please comments are welcome, thanks.

This work is licensed under a Creative Commons Attribution-NonCommercial-NoDerivatives 4.0 International License.

Yesterday Movie Review : A Musical walk down Memory Lane.
A Wrinkle In Time : Why I wasn't feeling 'it'.
Me Before You (2016)
Warm couch, Cold porch
FacebookTweetPin