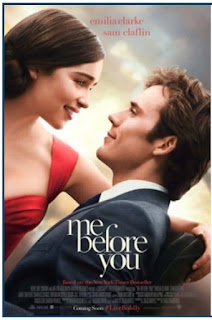 If it isn’t the hippie, naive and cheery Lou played by Emilia Clarke in this movie that doesn’t turn your heart to hot butter, then I don’t know what would.

Sam Clafin as Will Traynor (so moody) and Emilia Clarke as Lou, The game of Thrones mother of dragons serves as the care giver to the quadriplegic hunger games star. Now the thing is I’m not a fan of the whole moody, reject-ey, persistent-until-i-melt-your-heart mushy stuff, but this movie just does it in a brilliant way I mean he lives in a castle, how dreamy is that?.

The Chemistry is Heavy, setting is awesome but what I loved most were Lou’s outfits, like a washing machine exploded. Typically Hilarious.

Our moody hero, Will Traynor, at the start of the film is seen to be an enthusiastic achiever with a hot girlfriend until he’s involved in a motorcycle crash that leaves him paralysed from the neck down.

Lou is our damsel, so lowly, she lives in a dingy apartment owned by her parents and she also has a boyfriend (Mathew lewis) sort of a joker.
Will’s mother (Janet Mc Teer) a cold, rigid lady of the sorts is on a quest to find the perfect caregiver and Lou after being set up on an interview in an effort to impress does one of her wardrobe melodramas which I wouldn’t indulge in.

Will rejects Lou like a foreign body, but like a drug she fights back until he falls for her, she takes him out after being cooped up, wallowing indoors in solemn despair on his electronic wheelchair.

At the end we’re crying now, Will chooses to die….(so sad), well, on the bright side, we all enjoyed this emotional roller coaster, this is one movie you must definitely watch.

Also Read  From Smallville, One of the best Friendships ever in Television History

Please comments are welcome, thanks.

This work is licensed under a Creative Commons Attribution-NonCommercial-NoDerivatives 4.0 International License.

The Taking Of Pelham 1 2 3 (2009)
Tenet 2020 Review
Godzilla; king of the monsters yes, but not so great
The Funniest man on earth!
FacebookTweetPin1